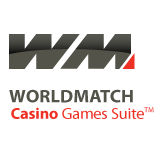 World Match has launched Fight Night HD, a new slot game that is based around boxing.

Fight Night HD, which is available in several versions with different payout levels, also includes a bonus game that involves the player in a training session with a punching ball, as well as a free-spin game.